How the Marketing Industry is responding to the War in Ukraine 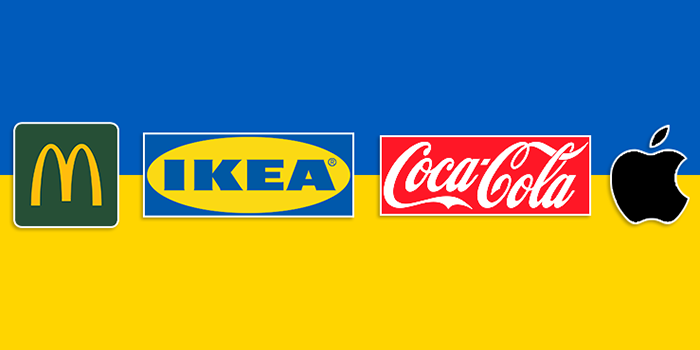 With all eyes on Russia and Ukraine, due to conflicts of political and historical interests and especially the installation of the war that we all know today, the Marketing industry acts quickly in the face of impact.

With all eyes on Russia and Ukraine, due to conflicts of political and historical interests and especially the installation of the war that we all know today, the Marketing industry acts quickly in the face of impact. A growing list of multinationals such as McDonald's, Apple and Ikea, among others, announced their departure from Russia, others cut services or new investment at the start of the war.

The objective of the companies to end any contact with Russia and thus dissociate themselves from the government of the Russian president, happens mainly not only to maintain their credibility, but also to defend a movement that we would never expect to happen in this way and in today's times, the so-called invasion of Russia into the country, leaving many desolate, among obviously other even more serious consequences. This individual decision of each company also ends up generating an economic obstacle for the country, not supporting the cost of the war machine, which turns out to be positive for those who want this 'nightmare' to end quickly.

Despite these actions, the digital marketing companies themselves started an awareness campaign against the war and in favor of Ukraine, with support for the colors of the Flag. This same movement also contributed to the gathering of several users on the web in protest at the current situation.

The first companies to withdraw from Russia were the oil multinationals, then came technology, consulting, car companies, retail and services.

Apple
Apple, in response to the military invasion of Ukraine, suspended all product sales in Russia, limited access to the 'Apple Pay' payment system and stopped offering certain information about Ukraine maps in the 'Apple Maps' application to protect the security of Ukrainian citizens.

Ikea
The Swedish furniture and homeware group also announced the temporary suspension of its activity in Russia and Belarus due to the invasion of Ukraine, interrupting exports and imports from the country.

McDonald's e Coca-Cola
McDonald's 'Fast Food' restaurant chain and the best-known beverage brand Coca-Cola were pressured by consumers to exit the Russian market in a protest against the invasion of Ukraine, the same step that had already been taken by other companies.
McDonald's therefore announced the temporary closure of its approximately 850 establishments in Russia. Coca-Cola also followed the same decision by announcing that they were going to close their business in the Russian market.

The world reacted quickly to Russia's invasion of Ukraine, containing damage and stopping the conflicts as soon as possible. From global financial sanctions to the simplest entertainment, dozens of brands have announced their partial or definitive departure from Russia. But despite the sanctions in the end, the digital marketing of these companies sends a message of peace, an awareness towards Ukraine.

Keep up to date with the latest news